Day 1 - Albany, NY - All players arrived in Albany, New York. That's the good news. The bad news is that 5 players (Michael Truex, Kent Arsenault, Brett Galbraith, Devin Zimmer, and Bill Allen) are without their equipment due to the winter storm that played havoic with the Midwest. At last report, the hockey gear should arrive by midnight. 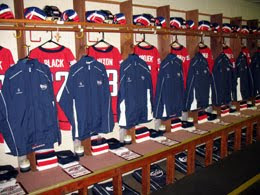 Uniforms and all accessories line the locker room before players arrive for the first of two practices this evening.

Just like a scene from the movie Miracle, where players were given a first hand look at their new "teammates" who weeks ago they were battling against, it was an hour to get to know one another.

After introductions, players spent about an hour to fix sticks, helmets, and face masks getting ready for the first team practice.

Once they got the new gear the way they like, it was time for Select Head Coach Paul Lowden to adress the team.

Goaltender Mike Poepping, of Missouri State, works on a deflection drill during the first practice.

Yea, I'll post more video of other players - promise - but hey....I've called Pep's games for 5 seasons. I know the Ice Bear fans want to see him in action.