9 am - After breakfast, the team assembles in the lobby for a tour of Switzerland and a 3 hour bus ride in a double-decker bus to Pralognan, France. Since the bus is here, this leaves me with just enough time to tell you that tonight's game probably will not be broadcast live. Internet may not be available....I'll keep you posted. I will upload the game after we get back to the hotel if necessary. 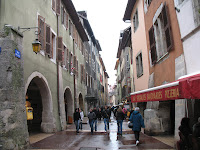 It was an hour bus ride to Annecy, France where we did some sightseeing and walked around an amazing town tucked in the mountains.

Annecy (448m/1470 ft; pop. 52,100), is situated on lake Annecy. It has a considerable amount of industry, including the bell-foundry which made the famous "Savoyarde" bell for the Sacré-Coeur in Paris.

All the walking around left us hungry, and good thing we were set up to eat at Le Vivaldi Pizzeria and Restaurant. The food was C'est excellent ! Then we gathered for a group photo. 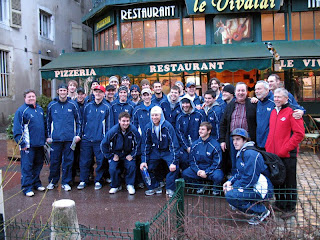 After lunch is was time for the 3 hour drive to Pralognan, France and Game #1 with the Val Vanoise Savoyards.

Located in the mountains, and running short on time, our bus driver Pierre Lungdique decided to best the time of the previous driver and get us up in record time.

Taking the corners wide and coming close to the guard rails, we made it alright, but with alot of trepidation. As Matthew Morang put it, "This is like a video game without a reset button."

The bus, a modern double-decker chartered rig, gave everyone sitting on the top and in the front (Ryan Hernandez, Kevin Brojek, and Kent Arsenault) something to remember.

The best part of the trip was passing through Albertville, France, the site of the 1994 Winter Olympics. In fact the Select's first game is being played in the Pralognan La Vanoise rink where the Olympic Curling event was held.

Alright, now what you have been waiting for, and again it's 4:30 am in Geneva, Switzerland, but the results of the game between Val Vanoise and the ACHA Select Team.....

The first game was amazing, not from the standpoint that it was a 17-0 Select team win, but because the 2072 fans stayed through the end of the game, shook hands with the players afterward, and many kids asked for autographs. 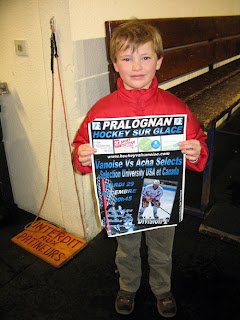 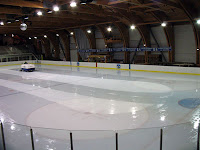 Shots: Selects: 55 on Jeremy Provost,  Val Vanois: 26 shots in Mike Poepping (Missouri State), who gets the shutout win. Both teams were 0-1 on the powerplay.

As for the game. It's saved but it's going to be a while before I can figure out a way to upload it. Time and internet capabilities are a factor.

Well, it's 5:30 am and the contacts are blurry, it's time to get to sleep. Assistant Coach Jim Martin of Michigan State, who's the only one left down in the business center with me, suggests I stay up all night and have breakfast at 6am. Sure...whatever!

We have an 11am departure time for Lusanne, Switzerland and a tour of the Olympic Museum tomorrow......ah.....I mean today.