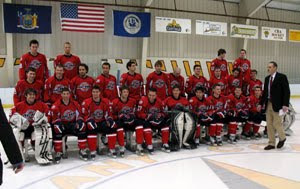 Day 2 - Albany, NY - December 27th - After an 8 am breakfast, it was time to head to the Albany County Hockey Facility for a third practice and team photo before packing up all the gear and heading for New York City to catch a flight to Geneva, Switzerland.

Before looking pretty on the ice, the team put on their game jerseys to look pretty for the camera. The team will bring three jerseys: red, blue and white.

Then it was time to get to work. Many players were a little rusty, having not played in a few weeks, but after the third practice things looked alot better. "We're looking good," Head Coach Paul Lowden said. 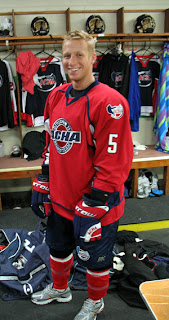 Kevin Brojek, decked out in the red Select jersey, shows his style..minus the skates. He says he doesn't need skates to move backward. Actually, he was in the back row standing on a bench and it was easier not to wear them for the team photo. 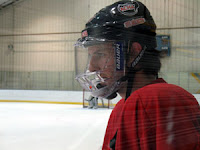 The team is decked out with black helmets and uniformly placed stickers, which have each player's number on it, will make it somewhat easy for me to know who's who.

Here's a drill..... did you notice something different about this video?

2:04 pm - We are packed in like sardines on the chartered bus. Luggage down the aisles, and hockey gear packed below. Somehow most of the players managed to grab and hold an empty seat next to them. Coaches and other non-players...well, we're one to a seat. I wonder how that happened!

Looking outside the window it's great weather! Sunny and 70....ok more like 40, but it's still a great day!

The DVD "Bodies of Lies" plays on the overhead screens in the bus. Never having seen it before, it does seem a bit violent, although I wouldn't mind seeing it at a later time.

I just looked at my computer battery and I have just enough time to save and send this. Talk to you when we get to JFK!

2:52 pm - Coach Lowden let me use his laptop. We're stuck in traffic on I-87 asfd;kl;kl ..... Arrghhh! A driver decided to squeeze between us and stopped taffic. Our alert bus driver stopped short of a collision. It's a Sunday, where does everyone need to go so fast?  That's the consensus as we all recover from the jolt.

3:05 pm - Traffic seems to be moving better now. I finally get to look at the Appalachian Mountains. Baren trees due to winter, it would be interesting to see what this aea looks like in the summer time.

3:22 pm - More traffic!  The Garden State Parkway is a mile away. Flashing red lights of a New Jersey State Police car heads down the right shoulder. Several cars are on the road, but there is no rhyme or reason for it. We inch along at 20 miles an hour.  We'll make it sooner or later.