10:35am - Wow....morning comes early. Seems like I've been up all night. Ha!  Three hours of sleep is all I was able to get, others grabbed about 5 hours.  Once again there's just enough time to send a short note before we're headed out for a trip to Lusanne, about an hour from the hotel, to visit the Olympic Museum.

Tonight's game will be (should be) live on the internet. Just note that the game is at 7pm and not 8 pm. So, using my conversion skills.....that's 12 noon Central time, 1pm Eastern, and 10 am West Coast time.

8 pm Swiss time - Unfortunately, once again internet capabilities are a problem. I have just a few minutes to tell you that we will be taping the game and hope that somehow we can post the video. (Video available below)

It's 2 am Swiss time now, and once again I'm filing this under Day 5. 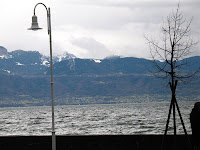 We left the Ramada Park Hotel in Geneva at 11am for a trip to the Lausanne. It's an incredible place situated on the shores of Lake Geneva.

Lausanne is built on the southern slope of the Swiss plateau, with a difference in elevation of about 1,640 ft (500 meters) between the lakeshore and its northern edge (Ouchy the city's marina) and the Le Mont-sur-Lausanne and Epalinges mountain range.

This is where we stopped and took a tour of the Olympic Village and the Museum. 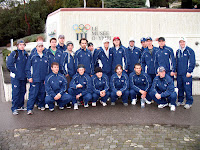 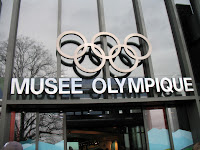 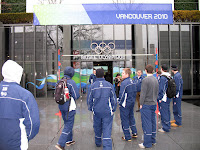 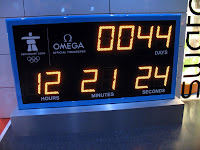 After the tour we went into Yverdon-Les-Bains, Switzerland to eat. 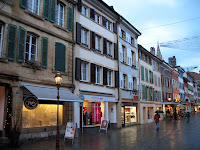 Because the restaurants close between 3 pm and 5pm, and lunch was on our own, we had a difficult time finding a place to eat.

Others found the only place still open..... as Coach Lowden poetically put it, "I came all this way to Switzerland just to eat at McDonalds?"

Luckily, a few of us, including Coach Lowden, found Gesipa willing to serve us Pizza and Lasagna after a few minutes of negociation. 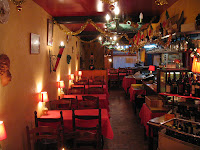 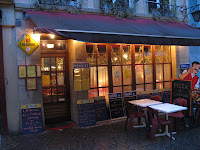 Then we headed to the rink for game two, against HC Yverdon in Yverdon-Les-Bains.  A 4-1 win, the Select team is now 2-0 on this European trip and 7-0 in the two trips. 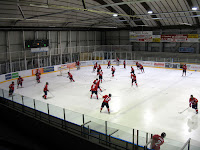 YCV was 0-4 on the powerplay and the Select team went 1-5 with the man advantage.

Well, it's off to the same routine tomorrow.....ah....today..... breakfast at 9am and and 11 am departure for a tour of Geneva. We're supposed to have some time after to come back to the hotel and grab some sleep before the big New Years celebration in downtown Geneva.