Day 12 was a long cold tiring one, which was so big, it rain into Day 13. Starting in Fussen, Germany, it ran through Ehrwald, Austria, and ended in Zurich, Switzerland. We checked out of our hotels at 11:30am (10am for me) and stowed our luggage on the bus. 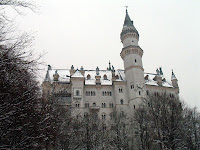 Then we headed for a walking tour of the Neuschawnstein Castle in Western Fussen, a castle that was the basis for Walt Disney's castle at the Disneyland theme parks.

Seven weeks after the death of King Ludwig II in 1886, Neuschwanstein was opened to the public. The shy king had built the castle in order to withdraw from public life - now vast numbers of people came to view his private refuge.

Today Neuschwanstein is one of the most popular of all the palaces and castles in Europe. Every year 1.3 million people visit "the castle of the fairy-tale king". In the summer around 6,000 visitors a day stream through rooms that were intended for a single inhabitant. 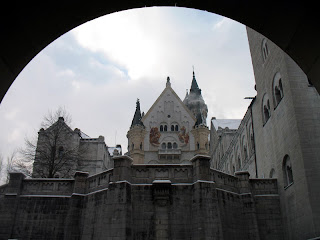 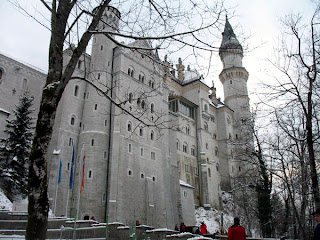 A long 30 minute walk up hill to the castle was filled with amazing sights. 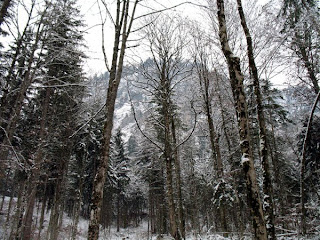 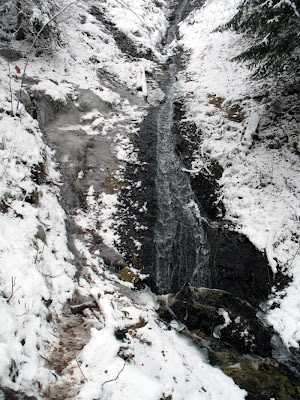 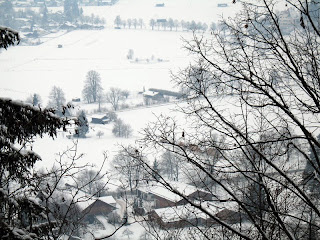 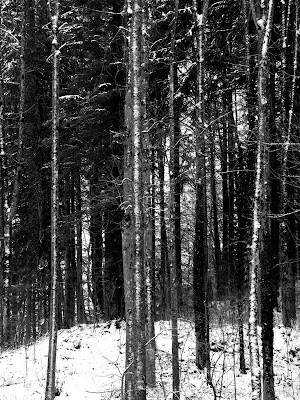 Had the weather not been about 15 degrees fahrenheit, we would have taken the horse drawn carriage. The uphill walk kept most of us warm. 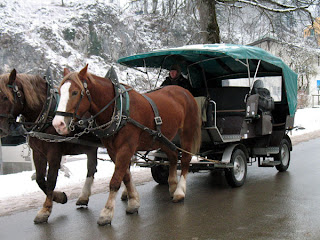 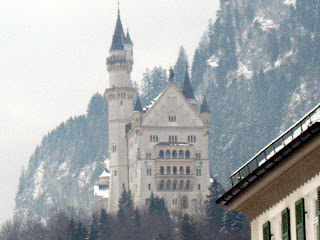 Halfway up to the castle, we stopped for a rest to take a look at the scenery in part of the Swiss Alps.

The castle was not designed for royalty, but as a place of retreat for Ludwig II to escape into his dream world. Movement in the foundation area has to be continuously monitored, and the sheer rock walls must be repeatedly secured. The harsh climate also has a detrimental effect on the limestone facades, have been endlessly renovated section by section over the years.

We arrived at the top, and after a 15 minute wait, started the tour. Unfortunately, we were told in a stern manner by our tour guide not to take pictures of the inside. Yes, there was a sign as we walked in, but nobody reads signs, right? We could, though, take photos from the inside out through windows. 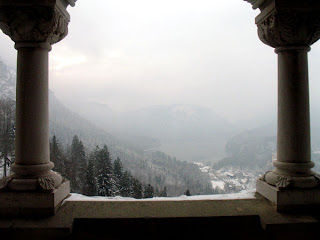 The pictures on the walls of the castle deal with love and guilt, repentance and salvation. Kings and knights, poets and lovers people the rooms. There are three main figures: the poet Tannhäuser, the swan knight Lohengrin and his father, the Grail King Parzival (Parsifal). These were Ludwig's models and kindred spirits. 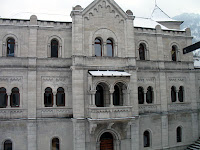 Swans also adorn rooms, including Ludwig's. His room, complete with a secret door which leads into a cave, is lined with swan patterns which is the Christian symbol of "purity" for which Ludwig strived.

Although the castle looked medieval, Ludwig used the latest technology of the time for comfort. The rooms were fitted with hot air central heating. Running water was available on every floor and the kitchen had both hot and cold water.

The toilets had an automatic flushing system.  Walls were thicher than usual to allow servants to move through out the castle, and to stock the rooms with wood in the fireplaces for heating. 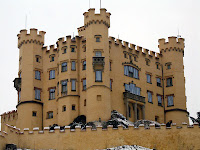 The king also used an electric bell system to summon his servants. On the third and fourth floors there were even telephones. Meals were carried upstairs by a hidden lift.

Technology was also used for the construction process. Cranes were driven by steam engines, and the Throne Room was built using steel construction.

Ludwig II spent most of his childhood in the Hohenschwangau Castle (above) while the Neuschwanstein was being built. 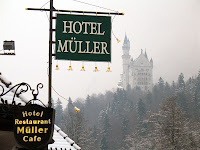 Hungry from the long trek down hill, the team stopped at the Hotel Muller restaurant for a nice German pregame meal before heading to Ehrwald for an open air hockey game on the side of the the Zugspitze (2950 meters above sea level), Germany's highest mountain, but it is shared with Austria. 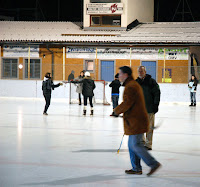 5:45 pm - We arrive at the Ehrwalder Gaisbachstadion ice rink during a cold (2 degree) evening in the mountains and had some time to get out on the ice - those of us who dared to jump on the surface without skates.


An hour later, it was time for me to find a broadcast location. Finally after an exhaustive search, we abandoned the safety the outdoor concession stand (where the parents decided to call home) for a corner of the rink away from fan traffic. 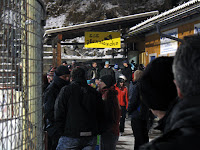 Carved into the side of the mountain, the rink's seating area is cold and snow-covered. Fans stood the entire game cheering and appreciating the game between both teams.

Braving the elements and trying to keep warm, Phil, Mary and I were able to get an umbrella as protection from the light snow that fell throughout the game. 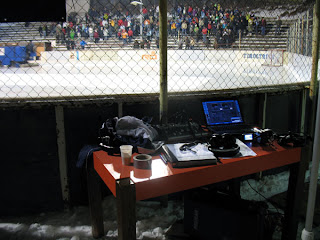 A 5-2 ACHA Select team win, the game was well played. From the EC Ehrwald website: "Coach Mario Bellina was very pleased with the overall performance (of the team) and saw this game as a good preparation for (league) games in the playoffs of the ongoing championship."